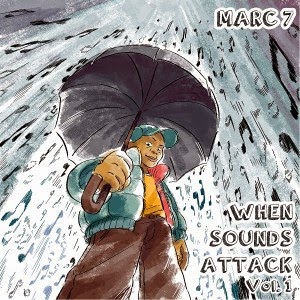 Marc 7 just released another solo record entitled "When Sounds Attack Vol.1". It is the successor to the Jurassic 5 MC's "Food Clothing & Shelter" album from almost exactly one year ago.

On the first single "Buckshots" you could already hear some more serious vibes than you might be used to from his rap group. On "When Sounds Attack Vol.1" he worked together with producers Hirolla Beats, Frenic and Blacksmith and collaborated some talented rappers in Blu, Knytro and MC Supernatural. There's a classic hip hop character in every track which makes this album a more than solid rap release by one of the better MCs out there.

Get the stream on Soundcloud.