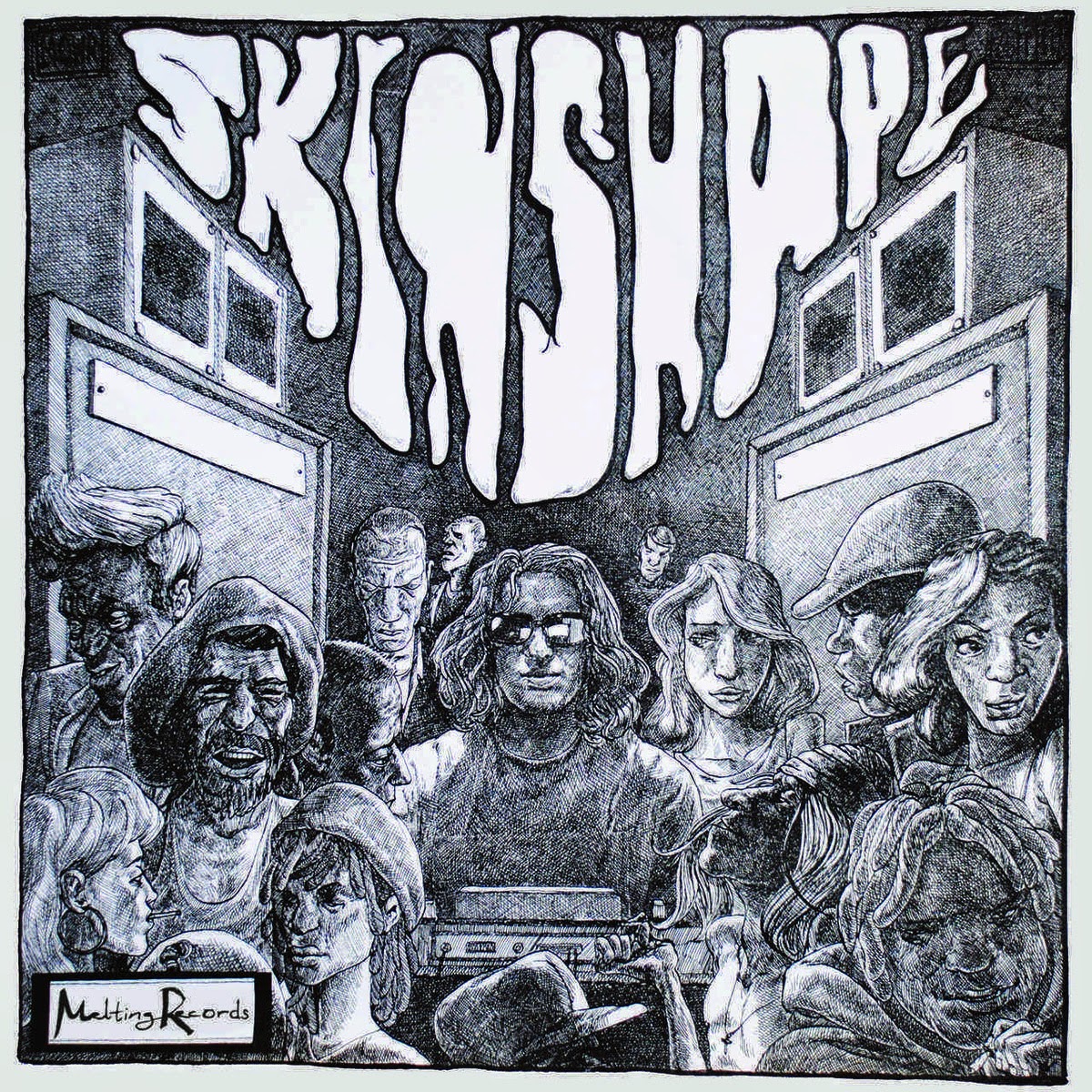 The long anticipated new Skinshape LP is currently reverberating from all kinds of online digging platforms. Time to catch up here on Mos Eisley Music and introduce you to the stunning works of the beatmaker from London.

On a total of seven tracks Will Dorey aka Skinshape takes you on a trip through various samples, beats and soul vocals. When people think of beatmakers they usually associate them directly to rap music. On this record you can hear a certain preference for guitar samples in almost all of the tracks. And the way in which they are embedded sounds more like psychedelic rock 2.0 than like aggressive Hip Hop bangers. In addition to that you will also find a very smooth character in Doreys music that is emphasized by the vocal appearances of Aaron Paul and Anina.

The Skinshape LP was released  a few weeks ago on Melting Records. Get the full stream and download on Bandcamp. 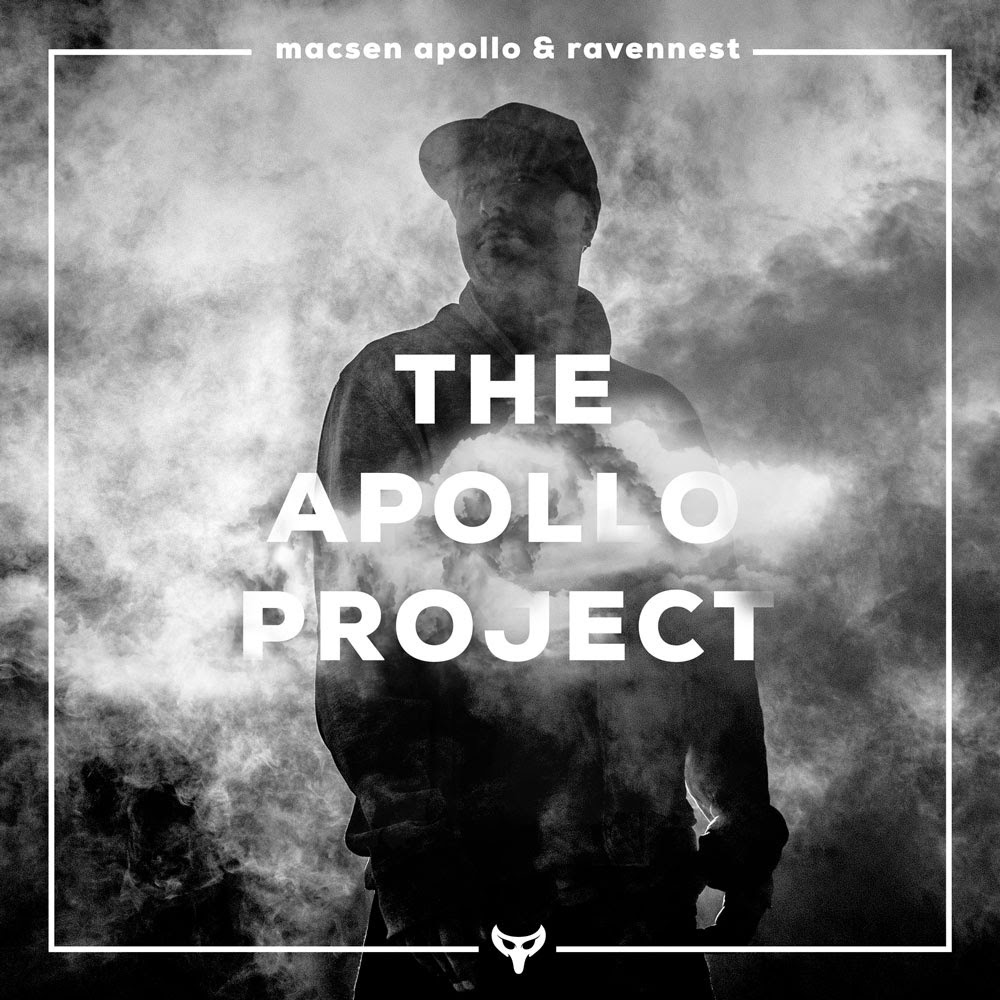 Smooth production and solid rhyming is the recipe for this great project. The appearance of a number of fellow MC's like Jay Colin, M.D., Mizztamizzo, Ell-I-Dee and singer Anne Brattinga make this record a well rounded collection of direct and intense Hip Hop tracks.

Træben - Looking At The Storm 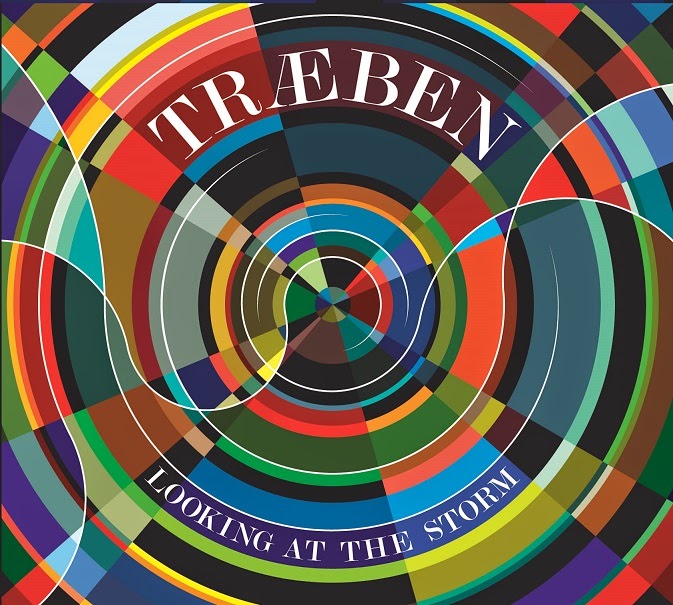 With their last album "Push" the dutch jazz combo Traeben already showcased an excellent way to work beautiful and challenging melodies into an interesting contemporary jazz sound. The brand new album "Looking At The Storm" is another example for this exciting and fresh sounding approach.

What strikes you first as a jazz band could also be mistaken for a rock group. Traeben's sound is built around bandleader Jens Larsen's guitar and completed by Søren Ballegaard on Saxophone, Olaf Meijer on Bass and Haye Jellema on Drums. Tracks like the uptempo opener "Do You Think They're Any Good?" almost sound like the instrumental version of what originally could have been a vocal song. The melody lines and songwriting create this kind of song-like modern jazz flavour which is pushed even more to the front on "Looking At The Storm". You will still hear a lot of solos on this album but you will find them embedded perfectly in the structure of the song and its melodies. Exploring a number of different moods, rhythms and speeds this CD certainly proves a highly entertaining character that no modern jazz fan should miss.

Unfortunately there's not a lot of audio available of this one so you might have to stick with the short preview on soundcloud or you will have to buy the CD somewhere around here. 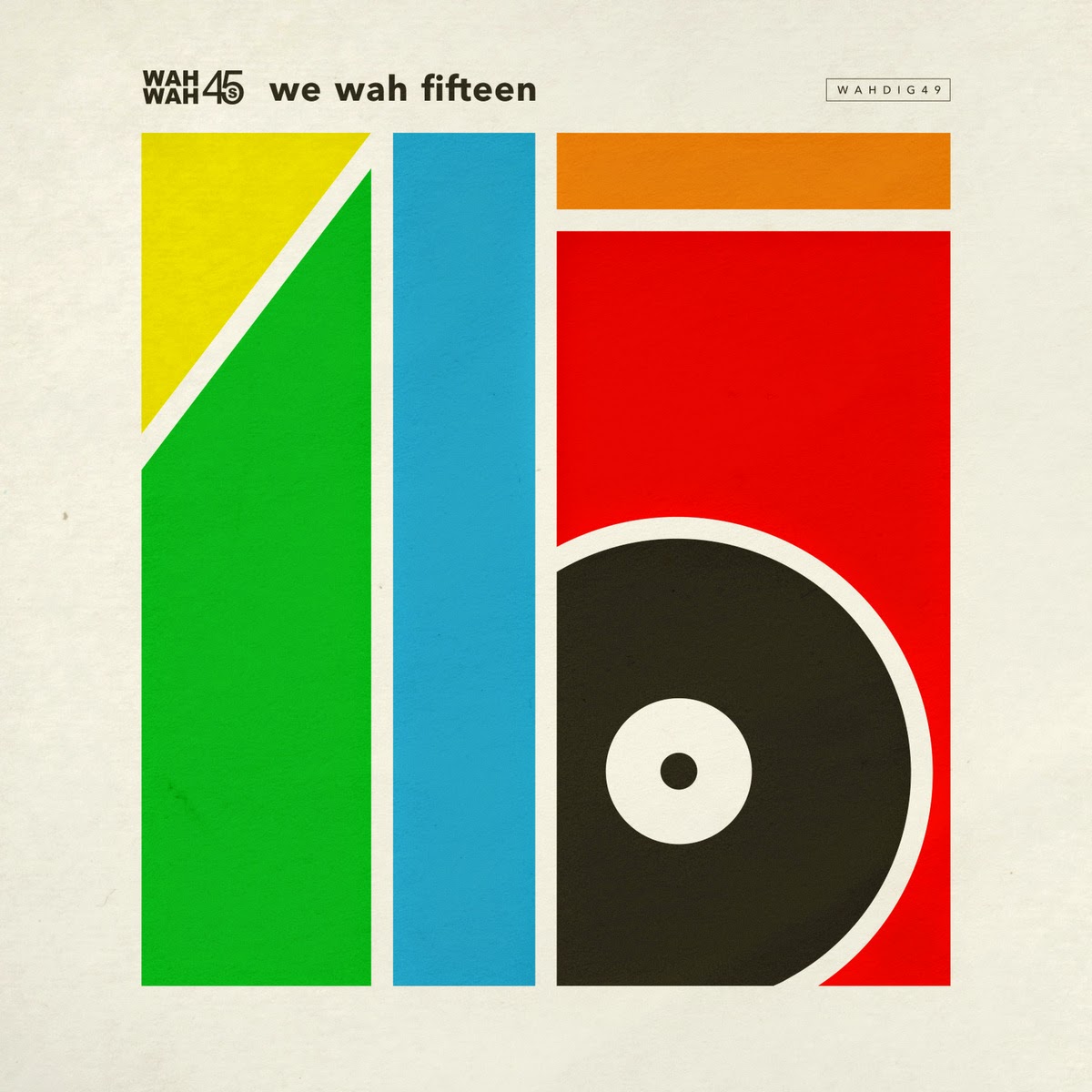 This year marks the 15th anniversary of Wah Wah 45, the label that brought us artists artists such as The Gene Dudley Group or Henry Pierre Noel. To celebrate this date, a sampler including various artists of the label's catalogue will be released soon.

Over the years Wah Wah 45s has become the home of many talented funk & soul artists. This sampler captures this development by including older tunes by Gizelle Smith & The Mighty Mocambos, Speeka or Unforscene featuring Alice Russel on vocals. A wide spectrum of soul songs is displayed through the tracks featuring electronic and more traditional approaches. And lets not forget the impressive brass ensembles in the Hackney Colliery Band and the aforementioned Gene Dudley Group. "We Wah 15" gives you a nice impression of a music label's development and a taste of some fine contemporary soul artists.

Digital release will be on October 13 on Wah Wah 45s. 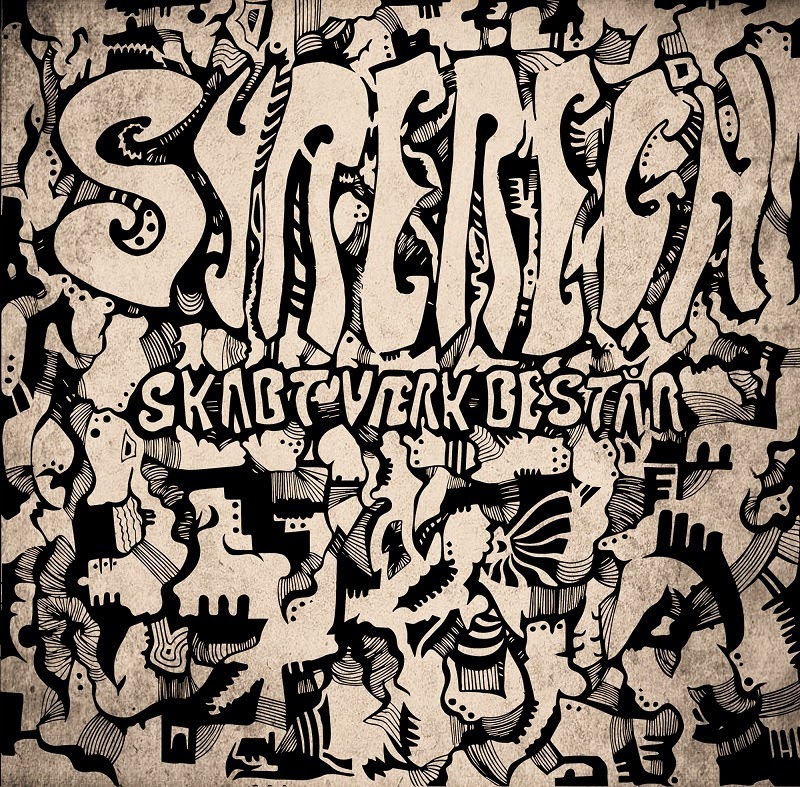 Formed in 2006 the Danish band Syreregn has made a name for themselves in the local scene by releasing a number of quality releases. Now the sound of the psychedelic rock group has been captured on their latest album "Skabt Vaerk Bestaar" which will be available on Vinyl.

The new LP marks their heaviest release as you might notice on tracks like "Hypnokongen". Still this album features a lot of different moods as in midtempo tracks like "Psychedelic Baby" or "Going Under" and psychedelic trips like the opening track "Skabt Vaerk Bestaar". The dynamic three piece band witnessed a lot of line up changes during the last years and features a lot of guest musicians on this album like William Kaae on Keyboard. The sound of Syreregn always oscillates between heavy riffs and a floating psychedelic character - a blend that should work highly effective for any rock fan of the old days.

Head to the Bilocation Records' Bandcamp for more Info and streaming. 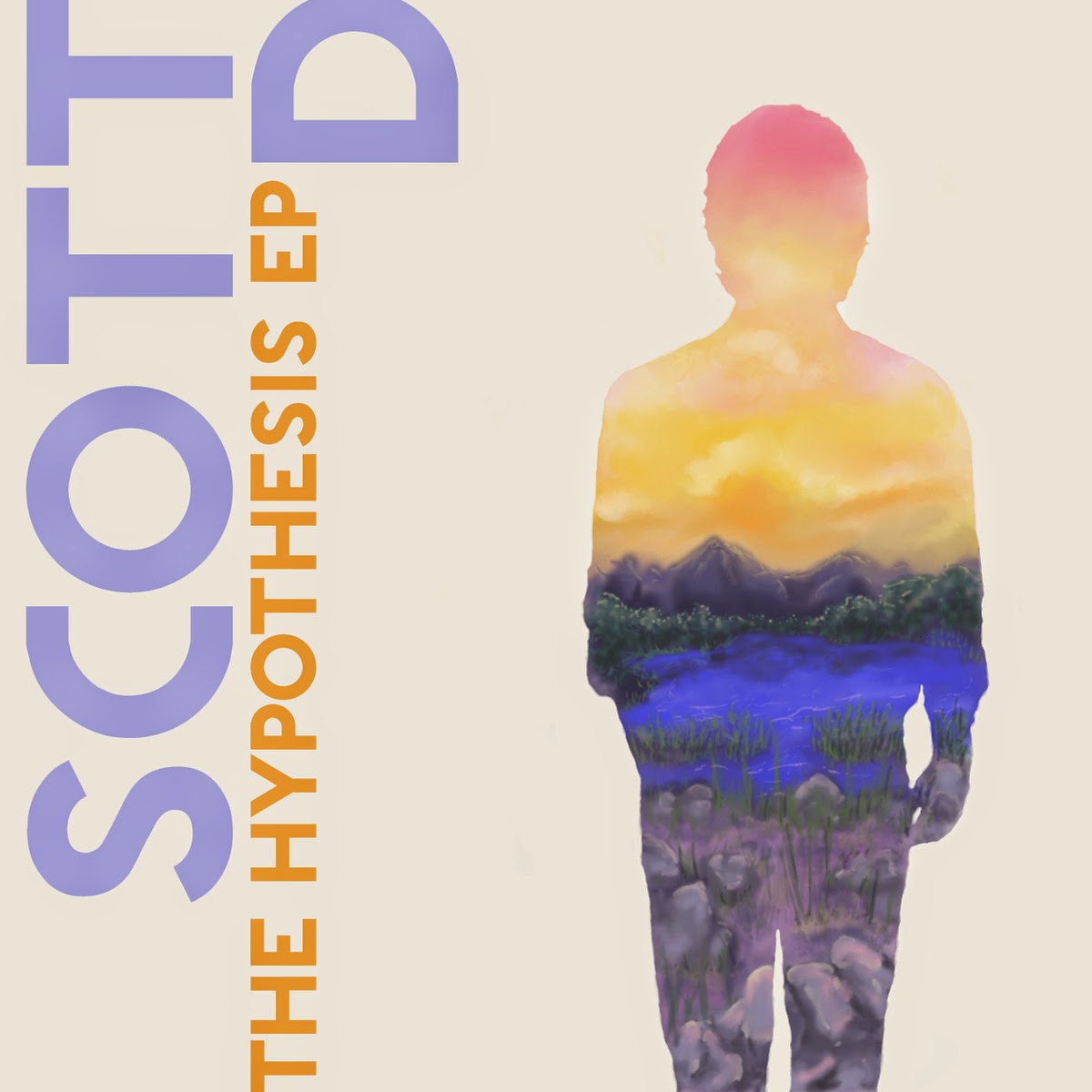 Scott D is a producer and rapper from Sherman Oaks who releases some beats and rhymes every now and then on his Bandcamp. His new project "The Hypothesis EP" features six tracks based on instrumentals by artists like Jazz Spastiks, MF Doom or Madlib.


Every track is based on a positive Hip Hop vibe, great production and a nice flow with lots of name-dropping. This EP is available for free on Scott D's Bandcamp just like his previous releases. 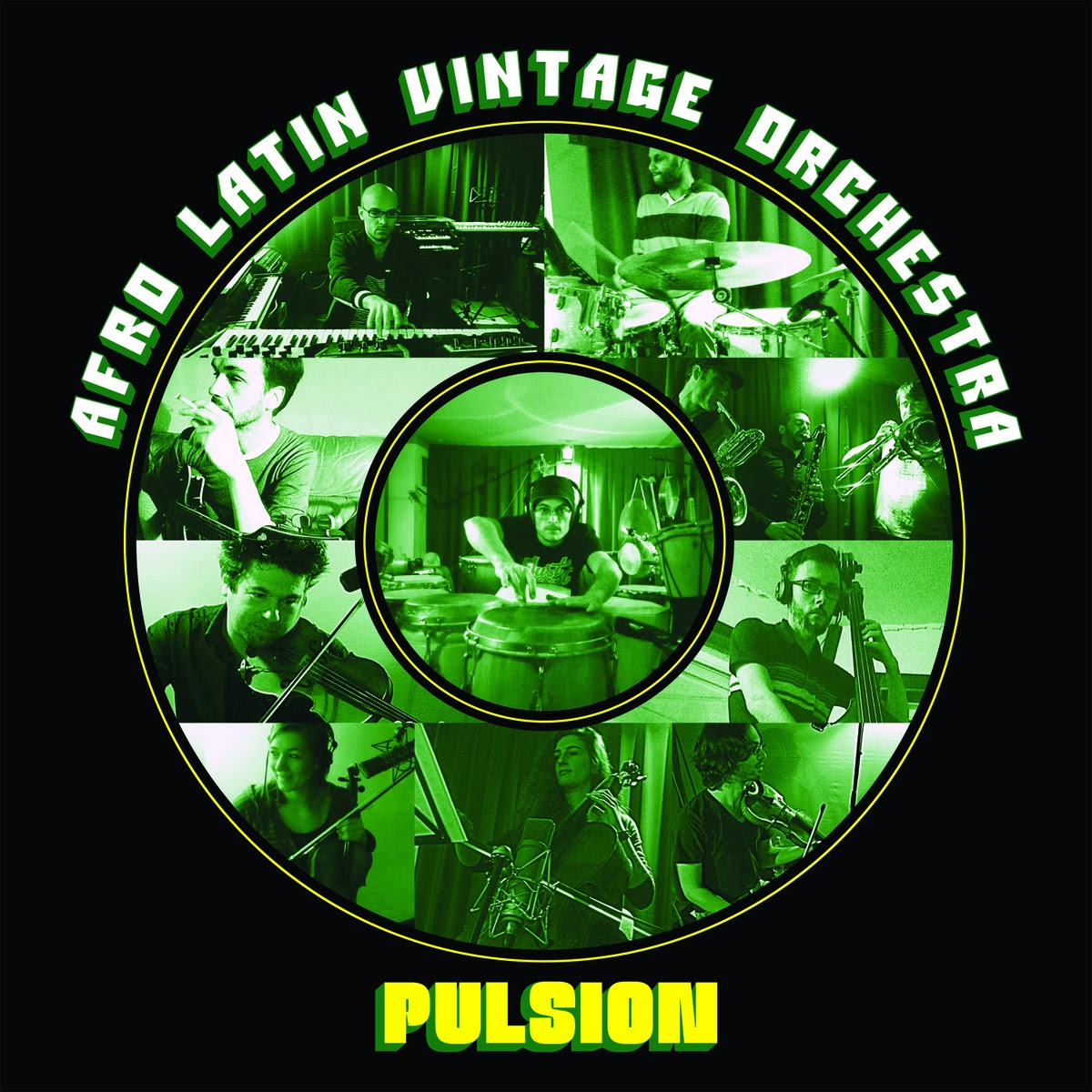 Though the name Afro Latin Vintage Orchestra already names a few elements that might describe the group's sound, there is yet more to it. The grooves are based on a multilayered fundament of instrumentation that includes guitars, keyboards, brass and an active strings section. The sounds of this ensemble always display a dynamic character that focusses on creating moods and intense atmospheres. There is certainly a unique approach in the band's music that creates a very own style of grooves somewhere between the roots of jazz, funk and latin, flavoured with some slight psychedelic aspects. 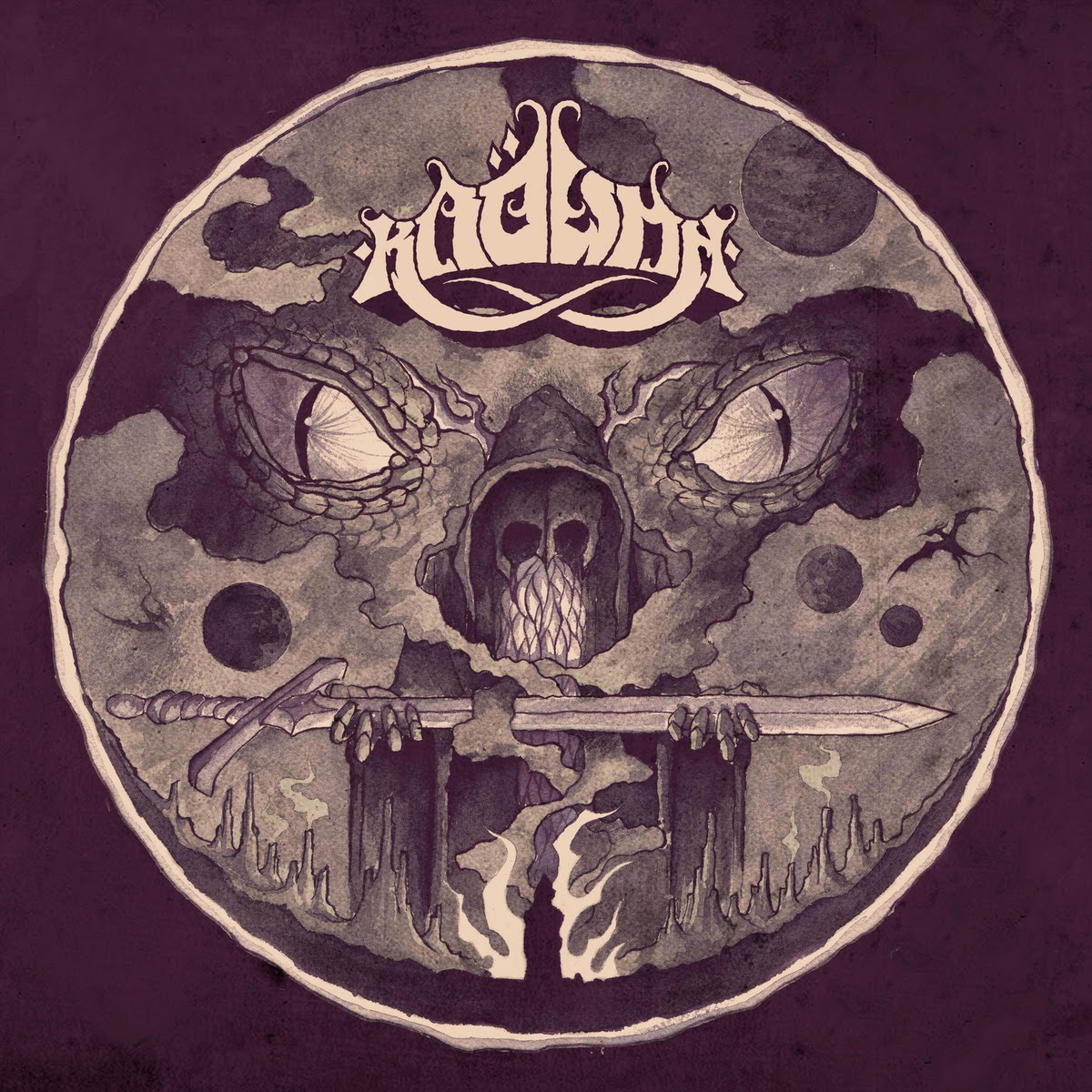 A few months ago the italian doom band Kröwnn continued their adventure through fantasy worlds and heavy floating riffs. The successor of the fantastic "Hyborian Age" is called "Magmafröst" and it shows the band playing their classic doom metal approach once again.

The sound of this dynamic trio unfolds like a dark cloud with heavy thunder upon its listener. Almost every track features heavy riffs carried by a slow and intense rhythm. Every now and then some demonic vocals appear out of the dark atmosphere that this band creates. There is no arguing that "Magmafröst" is a first class doom-trip fuled with psychedelic elements, that takes you through the most heavy sounds and darkest moods. 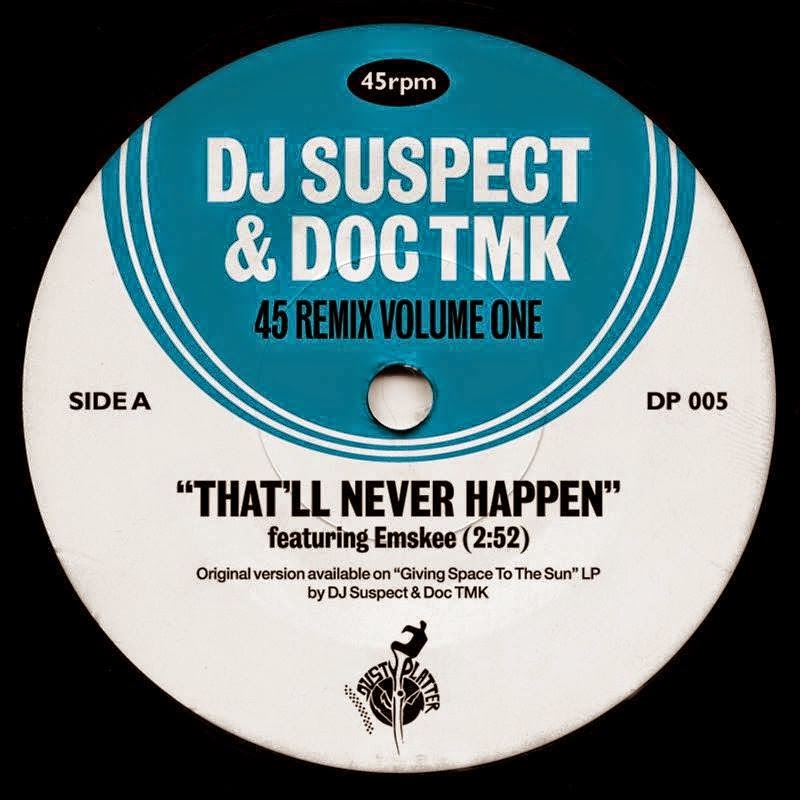 Side A features Emskee on the mic giving some nice old school flavour to "That'll Never Happen" while on the flipside the Canadian/German crew A State Of Mind rap on "Fresh". But let's not forget the incredible production and cuts by the French DJ team that really did an incredible job on this one. The limited Vinyl release will be available in late October.

Get the stream on Soundcloud and/or pick up the vinyl right here.

The Funk Ark - Man Is A Monster (Preview) 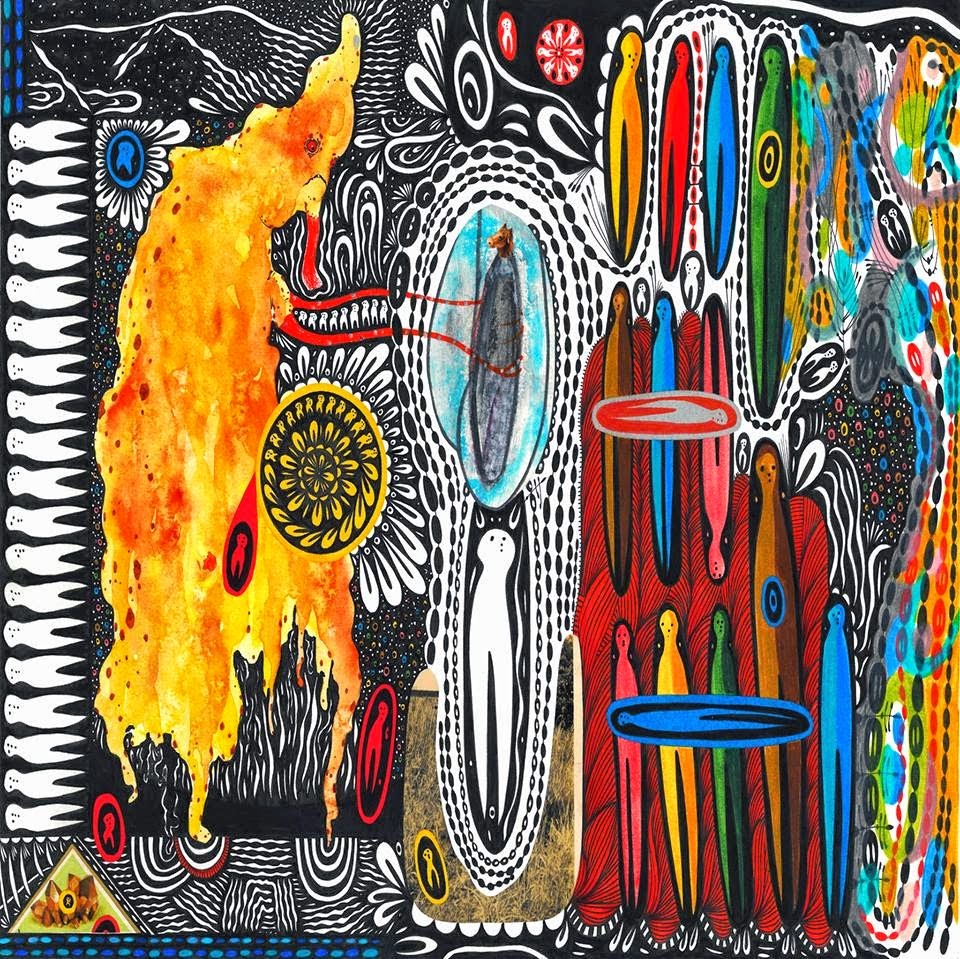 It's been a while since The Funk Ark proved to be one of the most dynamic funk bands out there on "High Noon". It was about time to get the news that the band from Washington signed with Ropeadope Records to release a new record entitled "Man is a Monster" in mid October.

Though the funk genre is obviously the first thing that comes to mind when thinking of this group, they already showcased their ability to integrate various rhythmic elements in their musical approach like reggae or afrobeat. It is the latter that is especially the case on the title track for the new album "Man is a Monster" which is already available on Youtube. A steady uptempo groove and dynamic horns make this tune definitely worth watching out for the full length album.

Get the stream on Youtube or get mor infos here. 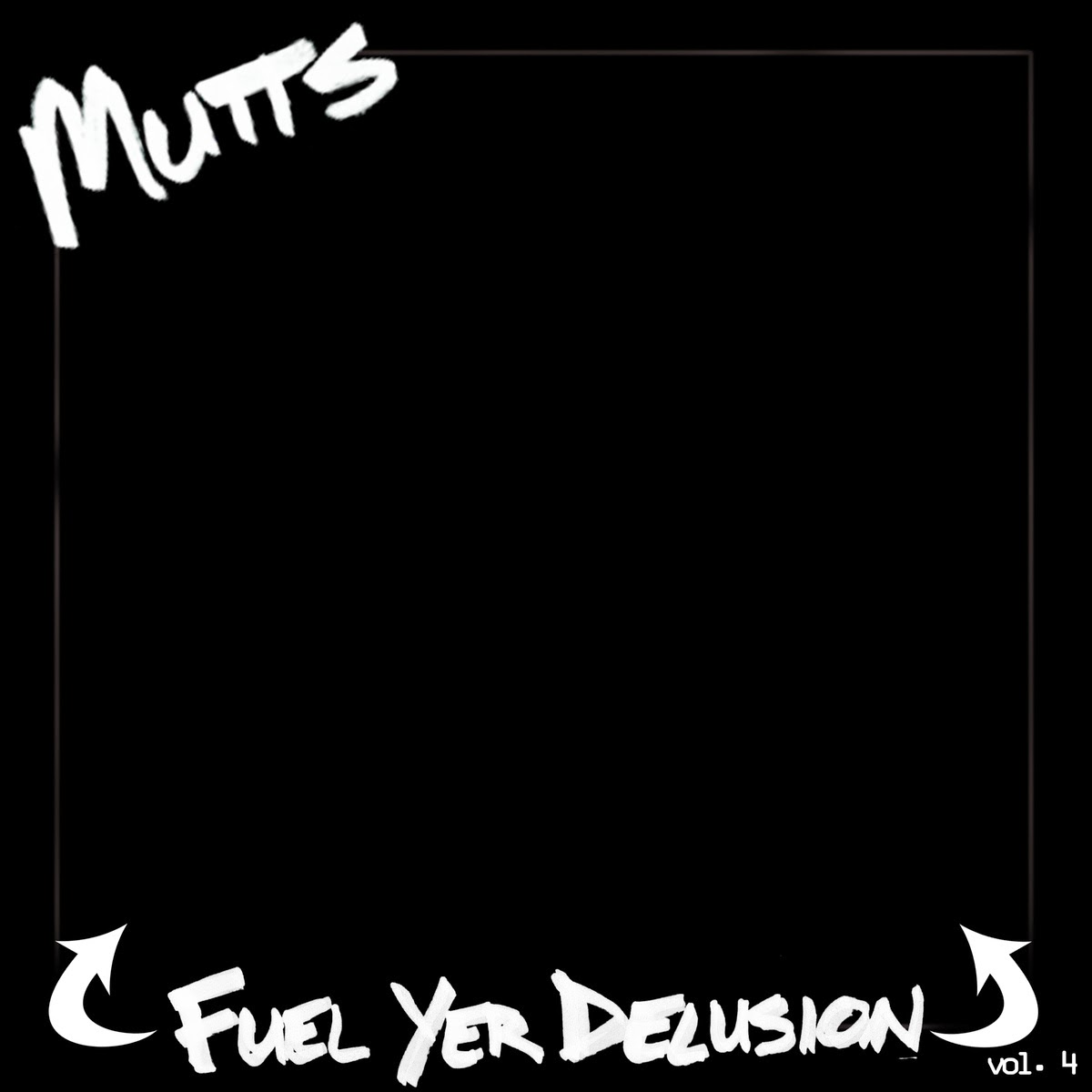 Mutts are about to release their 4th studio album entitled "Fuel Your Delusion". Again we are able to stream two songs before the album will drop early December.


In comparison to the last record "Object Permanence" the keyboard driven rock combo seems to return to its old sound that is based on the heavy sound of a distorted synthesizer. "Everyone is Everyone" is a rocking uptempo track that bursts with energy and a highly positive mood while the slow "I'm Trying" shows the band playing a smooth yet intense ballad. 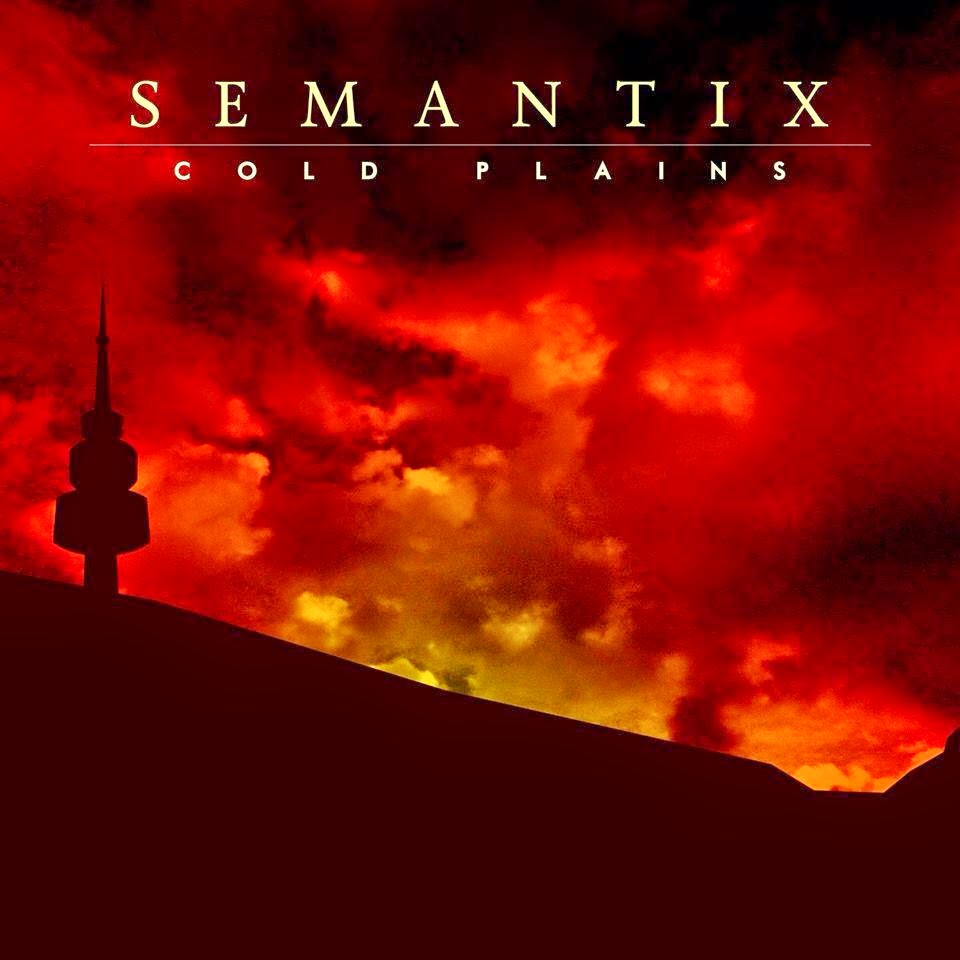 After forming in 2012 and supporting some big names in Hip Hop in 2013, the Canberra-based rap crew Semantix just recently dropped their debut EP "Cold Plains". Consisting of two MCs (Aplus and Mattrix), one DJ (DJ Dangger) and a Drummer (Obsene) this four man group is not your usual rap combo.

The new release features heavy flows and hard hitting beats on a total of eight tracks. A look at the cover art might give you an idea of the serious and fierce character of this record. Yet this attitude is clothed in funky rhythms and entertaining rap. You will also find guest appearances by Word Eye View, Odeon and Maundz who do their part in polishing tracks like "On & On" and "Power". Semantix is part of the Australian Caps Lock Collective that features lots of talented artists like Context & Jimmy Flipshyt.

Get the full stream and free download of "Cold Plains" on Bandcamp. 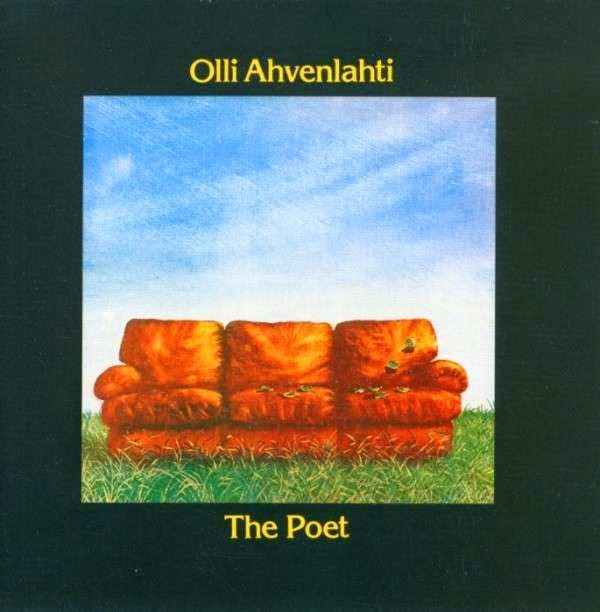 Many groove fanatics have been chasing Olli Ahvenlahti's "The Poet" for quiet a while. It features incredible jazz grooves by the Finnish composer. Originally released in 1976 this LP now sees a re-issue by Mr. Bongo.

Centred around the most popular track "Grandma's Rocking Chair" this album leads you from one funky jazz rhythm to another. All tracks are well orchestrated by the man who also contributed in Finland's entries to the Eurovision Song Contest. From cinematic moods in the opener and title track "The Poet" to uptempo tunes with funky rhythms and dynamic horns like "Sambatown (Rock Ridge)" this album really shows you why it has been on the list of so many diggers.

You can stream it for free on Soundcloud or get it here.